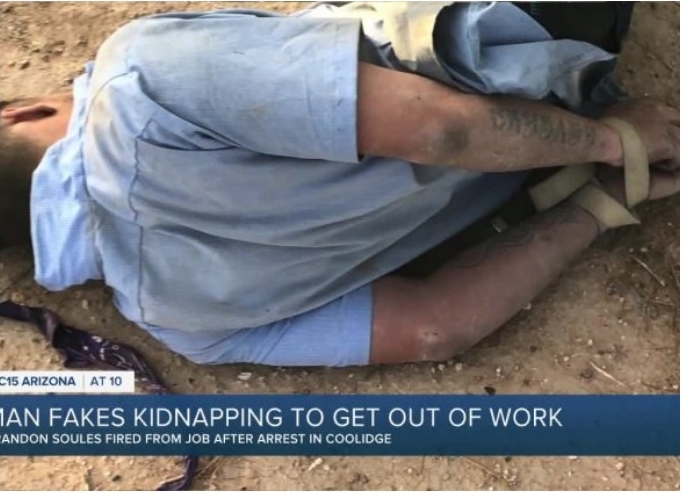 We all feel like taking a day off from our jobs from time to time, but one Arizona youth landed in hot water after faking his own kidnapping to avoid going to work.

On the afternoon of February 10, police in Coolidge, Arizona, received an emergency call about a man lying on the side of the road with his hands tied behind his back.

A police car was dispatched and soon reported in that they had indeed found a young man who appeared to have been bound and abandoned on the side of the road.

The “victim”, identified as Brandon Soules, 19, told police that he had been kidnapped by two masked men who first hit him on the head, knocking him unconscious, and then drove him around and dumped him where police found him. That wasn’t entirely true, though…

“First, the subject informed the police that two masked men kidnapped him, struck him in the head and took him to a vehicle before leaving him in the area where it was found,” police said in a statement. “Coolidge investigators conducted a thorough investigation and evidence was found that his story was made up and that there was no kidnapping or assault.”

Soules claimed that his kidnappers were after some money that his father had hidden around town, but police found no evidence of that. The surveillance footage they checked also contradicted most of his statements, and after confronting him about it, the 19-year-old admitted that he had made the whole thing up.

Brandon Soules confessed that he had been desperate to get out of going to work that day, and decided to fake his own kidnapping. He shoved a crumpled bandana into his mouth, then used his leather belt to tie his hands behind his back. Finally, he dropped down on the ground on side of the road where someone could see him, and waited for the police to “rescue” him.

On February 17, Soules was arrested for filing false reports with the police. He has since been fired from the tire company he worked at.