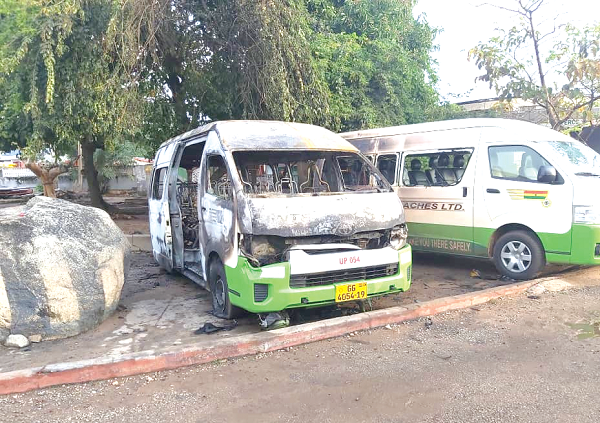 Security has been beefed up at the Intercity STC yard in Ho, following an attack on the premises by persons suspected to be members of a secessionist group.

When the Daily Graphic visited the premises yesterday morning, there was tight security there, with a number of officers and men from the Ghana Police Service and the Ghana Armed Forces (GAF) patrolling the area.

It was also observed that the place was unusually quiet, giving the indication that the Ho STC Yard was not operating. The management of Intercity STC had confirmed the beefing up of security at the Ho yard.

In the latest attack, some persons believed to be members of the secessionist group completely burnt an Intercity STC mini bus, while another was partially burnt, in Ho in the early hours of yesterday.

The group also posted warning notices at the STC yard and the entrance of the Volta Regional Police Headquarters directed at the Volta Regional Minister, Dr Yao Archibald Letsa; the Energy Minister, Mr John-Peter Amewu, and the Member of Parliament (MP) for North Tongu, Mr Samuel Okudzeto Ablakwa, for condemning its activities in the public space.

A statement issued by the Ghana Police Service on its Facebook page assured the public that the police had launched investigations into the burning of the STC buses and the subsequent attacks on its drivers.

“Preliminary investigation shows that there were 11 vehicles parked at the time of the incident. One bus was completely burnt and another slightly burnt.

The flag of the group, which calls itself Western Togoland, was found at the scene,” it added. It called on the public to remain calm and volunteer information to the police and sister security agencies.

Attacks cause fear in the region

The attacks by the secessionists group are having a bite on the region, as fear has gripped its residents. Underneath the calm atmosphere in Ho, residents are raising concerns about their safety.

A call has been made for the security agencies to tighten security in the region, especially at state-run institutions, and also increase the visibility of police patrol teams to give some assurance of safety to the people.

Yesterday, the Volta Regional House of Chiefs joined the chorus calling for independent and transparent investigations into the events of last Friday to bring the perpetrators to book. The chiefs called on people to be mindful of the ethnocentric comments they made against Voltarians because such statements and conduct came with some consequences.