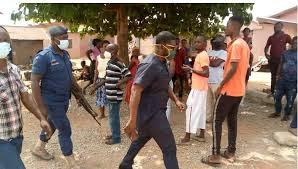 It was an eye-saw in the Ashanti region of Ghana as the youth from Adwumakasekese in the Afigya Kwabre south district beside a neighboring township Bomfa, destroying a number of properties and set to ablaze the town’s Shrine in service to the overlord of the Ashanti Kingdom Otumfuo Osei Tutu  II.

The sacred shrine is deemed to have been hosting most of the powerful deities belonging to the Asantehene since ancient days, but it was not spared as the irate youth of Adwumakasekese burnt it.

This was sparked after the police on Thursday shot three people from Adwumakasekese resulting to a death of one Agya Akwasi Wusu over a feud between a land litigation between the chiefs of Adwuamakasekese and Bomfa.

The youth of Adwmakasekese invaded the township of Bomfa apparently because of the death of their man Agya Wusu with the believe that it was the Bomfa chiefs who led the police to have attacked them which resulted in the death of their brother.

The police did not have it easy at all as after they set the shrine on fire they nearly burnt the Bomfa palace as well but the police had to call for reinforcement and through their expertise ensured the angry youth could not burn the palace.

Immediately after, a public announcement was made by Manhyia palace which was issued and signed by Otumfour Apagyahene, Nana Owusu Afriyie IV indicating that the land under contention belonged to Bomfahene, Nana Kwaku Twumasi.