The so-called “storm of the century” hits the eastern part of the United States, killing hundreds and causing millions of dollars in damages, on November 25, 1950.

These areas were blanketed with several feet of snow for several days and travel was impossible for nearly a week in some places. An accompanying windstorm covered a far greater area.

New York City recorded a 94 mile-per-hour wind gust. At Bear Mountain, just north of the city, a 140 mph gust was recorded. The winds throughout New England were of hurricane-like force. In addition, high tides and wind-driven surf battered the coastline. 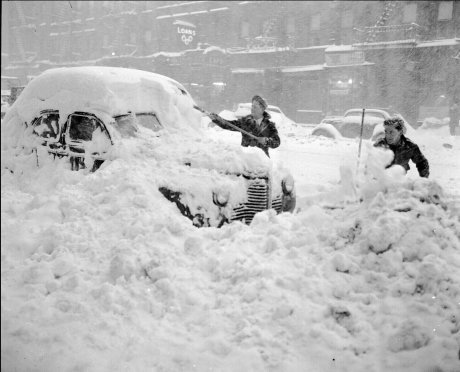 On the south edge of the storm, record low temperatures were recorded in Tennessee and North Carolina even without the wind chill. In Mount Mitchell, North Carolina, a temperature of 26 degrees below zero was recorded. The storm was unique, however, because it featured not only extremely strong winds and heavy snow but both record high and low temperatures.

In Pittsburgh, 30 inches of snow fell in a blinding snowstorm. Further north, Buffalo saw no snow, but experienced 50 mile-per-hour winds and 50-degree temperatures. Paul Kocin, a Weather Channel expert, has said that this storm “had the greatest contrast of weather elements in probably any storm, including the 1993 March Superstorm.” The extreme weather was deemed responsible for the loss of 160 lives over several days.

On this day July 22, 1992, Colombian Lord Pablo Escobar escape from luxurious prison that he had built amid police pursuit

On this day April 22, 1915, Germans introduce poison gas in World War I

On this day, April 7, 1994, Violence erupts in Rwanda, starting the genocide that led to the murder of an estimated 500,000 to 1 million people