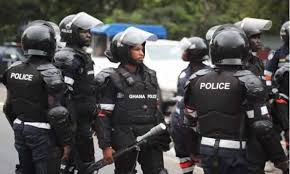 Some angry Nigerian residents in Gomoa Buduburam earlier today [Saturday, July 18, 2020] besieged a police station in the area after a police officer shot a Nigerian to death.

The Kasoa District Commander, Superintendent Samuel Odame who confirmed the incident to Citi News said the deceased, Walter Billions was shot after threatening to harm some police officers who were called in to restore calm after he had run amok in the late hours of Friday, July 17, 2020.

“Kasoa Divisional patrol team went to Gomoa Buduburam Station with a report that same night at about 0130 hours, they had a distress call that a young man armed with two cutlasses is chasing people at Gomoa Buduburam taxi Station.

“That the team rushed to the scene and met a young man armed with two cutlasses chasing people. Victim on seeing police attacked police with the machete. Police in an attempt to disarm victim shot him in the leg but the victim grew more violent and aggressive and was shot on the left arm to disarm him but he fell down and passed away,” a statement from the Public Relations Officer for the Central Regional Police Command, DSP Irene Oppong further explained.

Speaking to Citi News a leader of the Nigerian Community in Gomoa Buduburam, Emmanuel Chukuamaka Azebuake said the shooting was uncalled for since the deceased was not mentally sound.

He said the incident has been reported to the District Police Commander for investigation.

“I was able to call our Nigerian High Commission and inform them about what has happened and I was instructed to follow the due process of the law which is reporting to the District Police Commander.

“He has assured me that the culprits will not be left just like that. Right now, the boys are angry. If he had intentions of harming people, he would have. For now, we are all waiting to hear what the Police and the Ghana government will do about this.”