Ghanaians woke up on Monday to scenes of a gory accident that has so far claimed 30 lives. The unfortunate incident occurred at dawn at Kawampe in the Kintampo North Municipality of the Bono East region. The accident involves a long passenger bus and a Sprinter mini bus which collided head-on at dawn. Gory images from the scene have some of the blackened bodies lined up as recovery efforts by the Police and Fire Service were carried out. Eyewitnesses say most of the bodies were burnt beyond recognition and that the dead include a pregnant woman. 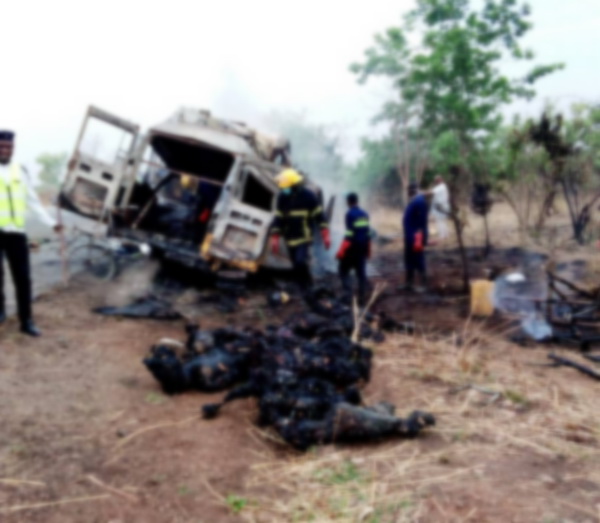 Survivors have been taken to the Kintampo government hospital but rescue officials fear that the casualty figure could go up. Reports indicate that the bus which was carrying sacks of fresh pepper and about 12 passengers and heading towards Kintampo from Tamale, collided head-on with the Sprinter between Kawampe and Dawadawa at about 4.00 am Monday. According to the Assemblyman for Kawampe, Mr Mathias Taasun, the two buses caught fire after the collision and all the passengers who got trapped in the Sprinter bus were burnt to death. “As I speak now personnel of the Ghana National Fire Service have been able to douse the fire and are removing the bodies of the deceased”, he stated. He explained that only five out of the 12 passengers on the bus survived.

Accidents on Ghanaian highways usually have high numbers of casualties, due to many factors, some on the part of drivers, passengers, pedestrians, nature of roads, or negligence of governmental authorities or institutions.

Below is a video from the accident scene, the images are quite graphic, viewer discretion is advised.