Months after the investigative piece by Ghanaian journalist Anas Aremeyaw Anas, which was broadcast by BBC Africa Eye, Kwesi Nyantakyi has been charged with fraud at a high court in the capital, Accra. The former president of the Ghana Football Association pleaded not guilty to the charges that arose from an undercover investigation for the BBC in 2018 which sought to expose corruption in African football. Mr Nyantakyi was filmed taking $65,000 (£48,000) from an undercover reporter. Following the documentary, dubbed Betraying the Game, he resigned from his posts within Fifa and the Confederation of African Football (CAF). But he dismissed the investigation at the time as “shoddy work with cut and paste“. 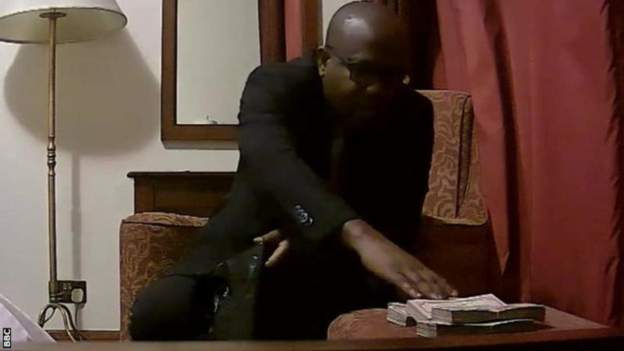 He appeared in court on Wednesday with a young football administrator, Abdulai Alhassan, who also denied allegations of fraud, conspiracy to commit fraud and corruption by a public officer. Both men have been granted bail of GHC 1m  ($184,000, £143,000) and are required to report to the police’s Criminal Investigation Department every Friday until the next hearing on 25 March. These are the first charges to arise out of the investigation by Ghanaian journalist Anas Aremeyaw Anas, which was broadcast by BBC Africa Eye.