Tshwane University of Technology (TUT) is a higher education institution in South Africa that came into being through a merger of three technikons — Technikon Northern Gauteng, Technikon North-West and Technikon Pretoria.

Two IT students from the South African university (TUT) named Siphamandla Mqcina and Philanjalo Ndlovu have come up with a groundbreaking invention to help the visually impaired. The device, which is called “C4Me” (See for Me) assists in providing better details of surrounding obstacles. According to the duo, the invention was inspired by seeing those who had a weak vision. Mqcina on an interview said they always see visually impaired students on campus and in a way to help them, they have used money out of their own pocket to fund the project. 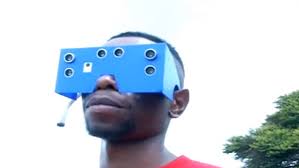 Siphamandla Mqcina and Philanjalo Ndlovu worked together to create the C4Me device enabling the visually impaired to perceive their surroundings better. They recently traveled to Canada to present their invention on a global stage. The duo are final year students and are studying Computer Industrial Systems. They hope to get sponsorship in order to mass produce the device.