A high school senior married his sweetheart in an emotional ceremony attended by close family members and friends after being given just months to live.

Chase Smith and Sadie Mills, both 18, from Indiana, had planned on getting married after college, but when the Indian Creek High School student learned the bone cancer he’d been fighting for the past six years had returned, they knew they didn’t want to wait.

The couple spent just four days planning their dream wedding before saying ‘I do’ on her parents’ driveway on April 29. They exchanged vows on the same spot where they had shared their first kiss six months before, the Indy Star reported.

‘We, every day, pray for a miracle together because we trust in God,’ Sadie said. ‘We pray that Chase would stay on this earth longer so we can bring more people our story of love.’

Chase was a 12-year-old nationally-ranked swimmer with the goal of one day competing in the Olympics when the discovery of a tumor on his femur led to him being diagnosed with Ewing’s sarcoma — a rare bone cancer that typically occurs in children and young adults. He fought back with chemotherapy, but the tumor on his left leg returned in 2016. 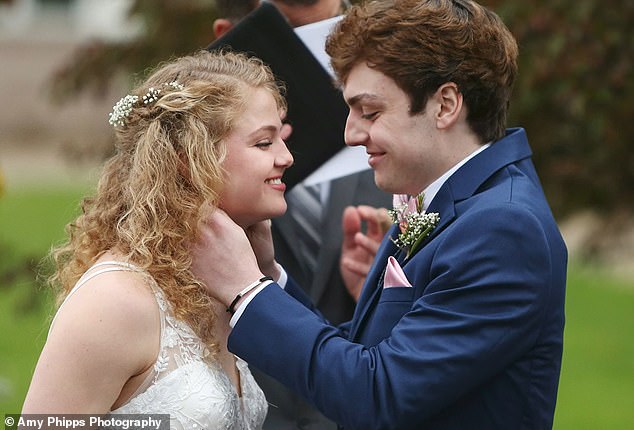 Three years later, in April 2019, his cancer came back for a third time with a tumor on his lower lung. Chase’s cancer battle was on pause when he met Sadie, a student at Mooresville High School, a little over six months ago during a swim meet between their rival schools. ‘I saw her before the meet. I thought she was pretty cute,’ Chase told the Indy Star.

After chatting at the meet, they exchanged phone numbers and started texting each other the next day. Chase was juggling swim meets and his SATs at the time and was concerned he was too busy to go on a first date with Sadie. ‘If you’re really interested, you’ll find time,’ she told him — and he did.

The two haven’t gone more than a day or two without each other since they embarked on their whirlwind romance late last year. During their long phone conversations, Chase and Sadie had talked about marriage, something they both agreed they wanted to do after graduating from college. But then in March, his cancer came back with fury. He had tumors all over his body, including on his shoulder, lung, back, hip, and the lining of his brain, which causes severe headaches.

He was given just three to five months to live, with or without treatment. Chase’s parents supported his decision to marry Sadie, and when he went to broach the topic with his girlfriend, she cut him off, telling him she wanted the same thing. The two families had a sit-down, and the Mills also gave the couple their blessing.

Before their ceremony, Chase and Sadie held hands around a corner so they couldn’t see each other while they prayed and read letters they had written each other. The couple later opened up about their wedding day during a video interview, with both of them agreeing it was the best day of their lives.

Sadie explained that she had ‘always wanted an outdoor wedding,’ and Chase had come up with the idea of placing the altar on the driveway of her parents’ home —where he had picked her up on their first date and where they had shared their first kiss. ‘That meant a lot to me,’ she said.

Like many emotional grooms, Chase burst into tears when he saw his bride-to-be walk down the aisle on their wedding day. ‘I was just so excited to see her because I hadn’t seen her all day,’ he explained. ‘It was just the pure reaction of being able to see her.’

The newlywed admitted that people do assume that they only got married because he is terminally ill, but he insisted that’s not the case. ‘That’s not at all why we decided to get married. It was more just a wakeup-call of, hey, God wants you guys together,’ he said. ‘What’s the point of waiting if you already know.’ 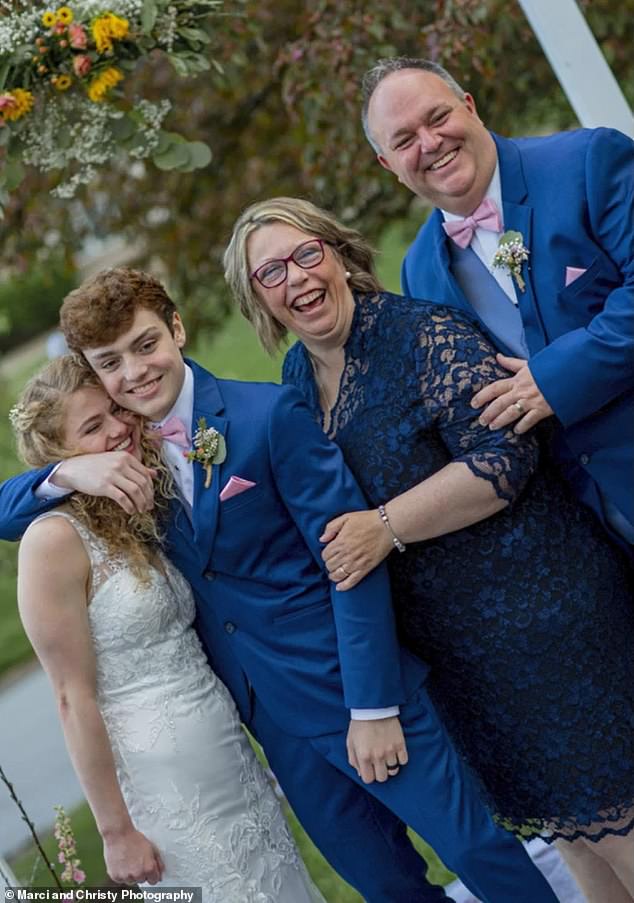 Chase said his new wife is the only one who can comfort him when the pain of his tumors and the fear surrounding his diagnosis become too much to bear. ‘She’s the one person that I can go to, and she can get my heart rate down,’ he said. The couple shared that they pray together every night before bed and every morning when they wake up. They refuse to give up, and they trust that God will give them a miracle.

A GoFundMe page was set up to help pay for Chase’s cancer treatment, and as of Tuesday, there have been nearly $100,000 in donations.